Yarrow
In August 1964, freshly graduated in botany, I was staying with my aunt and uncle in Edinburgh while attending the 10th International Botanical Congress. It amused me to see Napier's herbalist shop on the corner opposite the old medical school, as I came and went, attending sessions of the congress nearby; medieval and modern medicine co-habiting. But I had a far more picturesque encounter with Napier himself a few days later which it has been my pleasure these last fifty years to recall and (whenever possible) to recount.
After the congress finished, not wishing to hang around under the feet of my kind but busy hosts, I decided to visit another uncle who lived at Lochmaben and, being inclined at that stage in my life to solitary walks, I decided to walk down through the border hills. I would travel light, with a tooth brush and a notebook in an old meal-bag and sleep rough when night fell, seeking shelter only if the need arose. Ah, youth!
I set out across the Pentland hills on a sunny 13th of August, amused at the shooting parties with their dogs, guns and hampers, and descended to the river Tweed at Neidpath Castle around 4 o'clock. I crossed and rested awhile on a shingly spit, to soak in the tranquil beauty and to marvel at my good fortune. There was only one other human in sight, but his strange behaviour aroused my curiosity; he proceeded down the spit at a slow pace stooping frequently. I went over and quizzed him, whereupon he explained that he was gathering yarrow, a year's supply, for he owned the herbalist shop that had piqued my interest earlier in the week. Useful, I learned, for colds, hay-fever, toothache and baldness. I told him that I was a botanist, was interested in the flora, and had seen a good amount of yarrow on my way thither. Had I, he asked, seen any Euphrasia? He usually managed each year to find what he needed, but this year he was short of dainty little "Eyebright", essential for making up his eye ointment. I confessed I had not, and mused privately for a few moments on how the appearance of plants had suggested their various uses.
Refreshed and grateful, I wished him goodbye and set off southwards up the Manor Water to sleep eventually on a bed of bracken by a ruined castle. 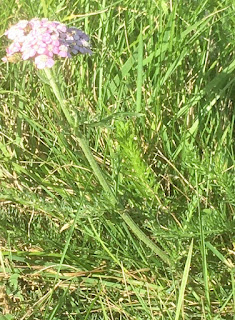 Future of the Labour Party

The Future of the Labour Party Introduction      ‘Power’ in British politics requires commanding the ‘interest' of 51% of the popul...

The 10 most popular recent posts

Ian West
I was born in Poole, Dorset, but remember little of the occasion. I spent from the age of 1 to 9 in Juniper Green on the western edge of Edinburgh, during and shortly after the 2nd world war. It was there that most of my siblings were born. We emigrated to New Zealand when I was 9, and re-emigrated back to England 3 years later, arriving in Southampton on the 20th October 1954.